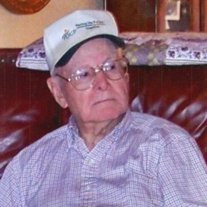 Mr. William M. Whatley of Guntersville Alabama died unexpectedly of heart failure at Huntsville Hospital Friday, February 8, 2013. He was a retired insurance agent who moved to Lewis Mountain to enjoy his offspring. Born in Birmingham, AL December 13, 1922, he was 90 years old. Mr. Whatley was preceded in death by his daughter, Charlotte Baker; parents, Greenberry Whatley and Minnie Hamlett; and four brothers. A former World War II veteran, he was a US Marine in the South Pacific. He was active in the insurance business and organizations in Tampa, FL and avid golfer and tennis player. Mr. Whatley attended Northside Baptist Church and enjoyed the fellowship dinners. He is survived by his wife of 70 years, Barbara Whatley; daughter, Suzie and husband Dennis Reeves, Sr.; and sister, Judith and husband Harold Harding of Noxen, PA; grandchildren, Charles and Christy Baker of Palmer, AK, Dennis and Ann Reeves of Guntersville, AL, Daniel and Angela Reeves of Guntersville, AL, Christopher and Kim Baker of Pinson, AL, and Christian and Beverly Baker of Madison, AL; ten great-grandchildren; five great-great-grandchildren; and numerous nieces and nephews. A memorial service will be held at 2 PM Wednesday, February 13 at Carr Funeral Home. The family will receive friends from 1 PM until service time. The family invites everyone to the Northside Baptist Church for refreshments after the service.

The family of William Whatley created this Life Tributes page to make it easy to share your memories.

Send flowers to the Whatley family.