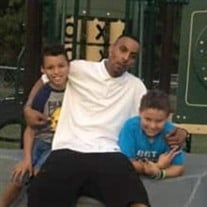 Victor Dwight Poe was born August 27, 1987 in Marshall County Alabama. He was called home July 31, 2019 at 1:06pm at the U.F. Health Sprands Hospital in Jacksonville, Florida. Where him and his girlfriend was on vacation. Victor enjoyed being... View Obituary & Service Information

The family of Victor Dwight Poe created this Life Tributes page to make it easy to share your memories.

Send flowers to the Poe family.