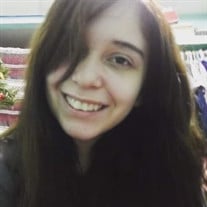 Stormy Hernandez, age 18, of Guntersville, passed away October 7, 2021. She is survived by her parents, Ricardo and Mittis Joyner Hernandez; sisters, Jessica Maria Hernandez, Maria Consemption Hernandez and Shequilla Lanea Hernandez; boyfriend, Austin Light. Stormy Aldonza Hernandez was the kindest soul one could ever come to know. She held an endless smile, and an endless place in so many hearts. At a glance, the young woman had her “rough around the edges” persona. The angsty teen that did not want to have much to do with people, and though that was true to an extent, she actually cared about everyone she met. All it took was her to come bouncing towards you and grinning ear to ear for every part of the facade to melt. She always left the room happier than when she came in. It was just her style, in ripped jeans, and thick eye-liner that Stormy was herself still. She took up a lot of interests, and in her age, explored all the avenues that caught her attention with high hopes. There are too many to list, to be sure, for a person is always more than can be understood by another person. However, some of these interests included music of all sorts, gems and crystals, and a passion for helping the human condition. Of everything, music was in her blood. Notes, chords, and melody moved her and possessed her. She was not afraid to sway in the moonlight or jump in the mosh pit. She held her own in it too, with a smile on her face. At times, music even persuaded her hair color. From the niche, like Something Corporate and Jacques Mannequin to the shining celebrities of Fall Out Boy and Taylor Swift, everything was for listening. The goth inside, as grounded as she was, could not ignore the notion that there is something intrinsic to gems and crystals we do not perceive. Whether or not that to be true, it certainly was for her. The gems needed to be charged in the sun, for it is practical that heat will accelerate particles inside them and have a low vibration dispersing of the innate energy. This was her ritual, and she swapped out the one crystal that would be around her neck depending on the ambience of the day. What she enjoyed most, though, was being where she was needed. She found it difficult to pinpoint where that was exactly, but it was for certain to be in scrubs. She looked into pharmaceuticals, patient care, physical therapy, and even dental assistance. There was nothing too difficult for her to deal with in the hospital, taking on some of the most unpleasant of duties. For her, it was just another day in the office. Thank you, Stormy. Thank you for everything that you brought to our small communities. It was so much more than could ever be measured. Be with God, and see everything you ever wanted.

The family of Stormy Aldonza Hernandez created this Life Tributes page to make it easy to share your memories.

Send flowers to the Hernandez family.