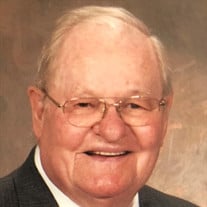 Remembering a Kind Man (Psalms 116:15) Sharp William Rush, born January 20, 1926 on Georgia Mountain, died on June 7, 2020, at the age of 94 following a brief hospitalization. He was resident of Marshall County, AL most of his live and lived out the end of his days in his home on Georgia Mountain within walking distance of where he grew up. He was a born-again Christian who recognized Jesus as his savior, made a public profession of his faith and lived his walk. He was a long-time member of Mount Carmel Baptist Church, where he served as a deacon for many years. He enlisted in the US Navy the day before his 18th birthday to join the fight in World War II, and served on the SS Edwin Markham, the SS Quaker Hill and the USS LST-699 in the Pacific campaigns. As a Seaman First Class, he was honorably discharged on June 4, 1946. Upon his return from the war, he and his childhood sweetheart, Geneva Edmonds Rush, eloped in Rising Farm, Georgia on July 2, 1946, and they loved each other so much that they did it again in Las Vegas on July 2, 1987. Their marriage was a fiery and passionate partnership that lasted until her passing in 2011. He was a farmer (with a lifelong grudge against all mules on general principal), a welder, a master plumber, a general contractor and an entrepreneur. He founded and operated S.W. Rush Construction Company where he was known as a fair contractor and an honorable man, until his early retirement at the age of 55. He was a generous man throughout his life. Generous with his time, his love and, when he had them to give, material things. From volunteering with the Gideons International and serving as the Marshall County president of that organization for several years in the 1980s, to quietly supporting family members ambitions, from refurbishing a house as a gift for his daughter to giving visitors at the Playhouse small gemstones he hand-polished, those he loved did not want for anything he had to give. He was an ambitious man with a strong competitive streak. He would sneak you money to keep you playing in a game of Monopoly, but he was too competitive to ever let you win. Even to the end, his competitive streak went so far as playing hours of cut-throat Gin Rummy with anyone he could rope into losing to him. He was fascinated with life, travel, adventure and was a passionate hobbiest. From the time he witnessed Lake Guntersville’s creation, he fished that lake for decades. He flew several of his own small airplanes, went metal detecting throughout the US while traveling with Geneva and other family members in their motor home, and became a rock-hound who got great joy from cutting and polishing semi-precious stones (especially all those opals). He was a loving family man who was never happier than when surrounded by the entire Rush clan, holding a family member’s new baby, celebrating the little family wins or steadfastly helping the family through sad times. While preceded in death by his wife (Geneva), his parents (Chris and Effie), and all 7 of his siblings (Johnny, Idell, Pat, Jesse, Chris, George and Wesley), he is survived by his 2 daughters (Louise Williams and Wanda Watson), his 5 grandchildren (Christina Frye, Kimberly Schauff, Jennifer Jones, Julie Waldrep and Jonathan Williams), his 11 great-grandchildren (Tiffany, Ashley, Cody, Emma, Brendan, Ethan, Nicholas, Kaylee, Georgia, Aiden and Riley) and even 3 great-great-grandchildren (James, Bennie and Summer).

Remembering a Kind Man (Psalms 116:15) Sharp William Rush, born January 20, 1926 on Georgia Mountain, died on June 7, 2020, at the age of 94 following a brief hospitalization. He was resident of Marshall County, AL most of his live and lived... View Obituary & Service Information

The family of Sharp William Rush created this Life Tributes page to make it easy to share your memories.

Send flowers to the Rush family.