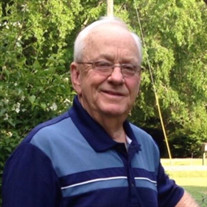 Richard Francis Sherrod, age 74, of Guntersville, Alabama passed away in Huntsville, Alabama on Sunday, April 17, 2022. Born in Blytheville, Arkansas on March 10th, 1948, he was the second oldest of seven children. He was raised in Sikeston, Missouri and attended Sikeston High School where he participated in the student council, was a member of the wrestling team, and played the bass horn in the marching band. He was a proud member of the 1967 graduating class and felt a close kinship to his fellow Bulldogs that continued throughout his life. While in high school, he met and fell in love with his IGA coworker and future wife, Ellen Sherrod. The Vietnam war was in full swing, so he stopped by the Navy recruitment office and signed up. He was quickly swept off to boot camp and began his training to serve as a radioman on the USS Badger where he was a plank owner. He also played the bass horn in the Navy band. - …. .- -. -.- -.-- --- ..- ..-. --- .-. -.-- --- ..- .-. … . .-. …- .. -.-. . -.. .- -.. .-.-.- He proposed to his sweetheart, Ellen, and they were married on the Navy base in Bainbridge, Maryland. Following the wedding he and his wife were stationed in Puerto Rico for two years. His final Navy transfer took them to California where his military career ended when he decided not to re-enlist. He returned to Missouri and settled with his wife in Greenville, where they welcomed the arrival of their daughter, Becky. He began his post-military career as a highly-sought-after instructor teaching heating, air conditioning, and refrigeration all over the US. In his mid 40s, he shifted careers and began working as a pump mechanic for the Delta (now Valero) refinery in Memphis, TN. He retired from there and moved to Guntersville, Alabama where he began driving a school bus for a local school system. While semi-retired, he utilized his extra time working in the yard, playing golf, enjoying Lake Guntersville on his boat, and playing a little bass guitar now and again. He also loved to show off the beauty of Alabama to his friends and family. As a strong man of faith, who sought an ever-closer relationship with God, he also enjoyed worshiping and singing in the choir of his home church in Union Grove. His mother, Virginia Sherrod, father Joseph Sherrod, and youngest brother Jay Sherrod all of whom preceded him in death, will be welcoming him into his new heavenly home. He is survived by his wife Ellen Sherrod, daughter Rebecca Sherrod, and siblings Joe (Phyllis) Sherrod Jr., Judy (Terry) Hopkins, Ronny (Marcia) Sherrod, Charles E. Sherrod, and Susan (Rick) Jolliff, and a multitude of nieces and nephews. Visitation for Richard will be Friday evening April 22, 2022, from 6:00 p.m. to 8:00 pm at Carr Funeral Home at 1960 Obrig Avenue, in Guntersville Alabama. The Funeral services will be held Saturday, April 23, 2022, at Union Grove First Baptist Church at 3920 Union Grove Rd. Union Grove, Alabama. If you would like to donate in his honor, he regularly supported St. Jude’s Children’s Research Hospital and the Shriners Hospital for Children.

Richard Francis Sherrod, age 74, of Guntersville, Alabama passed away in Huntsville, Alabama on Sunday, April 17, 2022. Born in Blytheville, Arkansas on March 10th, 1948, he was the second oldest of seven children. He was raised in Sikeston,... View Obituary & Service Information

The family of Richard Francis Sherrod created this Life Tributes page to make it easy to share your memories.

Send flowers to the Sherrod family.