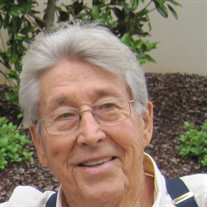 Richard “Dick” Glenn Cunningham, 87, of Birmingham, formerly of Guntersville, passed away Wednesday, June 11, 2014. He was a beloved husband of 62 years and cherished by his family and friends. He loved people and had a way of making everyone feel special, had the most wonderful smile and a great sense of humor. He was a man of strong faith who freely shared his belief in Christ. He showed us all what it was to love the Lord, his wife and family with all his heart. He served his country in the Merchant Marines and U.S. Navy during World War II as a radio officer and taught officers the design and operation of radios and then Geiger counters used during nuclear tests in the Pacific. He was an accomplished electronic engineer involved with the early design of televisions at the American Television Institute in Chicago. He was a pioneer in Electronic Test Equipment and used that knowledge to start his own company selling electronic test equipment which he eventually sold after 20 years to the John Fluke Manufacturing company. He was a very talented musician who played the piano and other instruments. His favorite song was the Old Rugged Cross. He is survived by his wife of 62 years, Gloria Cunningham; son George Cunningham and wife Jeanette; son Glenn Cunningham and wife Karen; daughter Colleen Davenport and husband Mike; daughter Kathleen Grigsby and husband David; son Rick Cunningham and wife Cretia; 8 Granddaughters, Kelly Stegall and husband Mark, Abbey Busch and husband Ryan, Christine Cunningham, Ashley Davenport, Gabrielle Cunningham, Laura Ann Davenport, Inna Davenport and Sara Grigsby; 6 grandsons, Justin and Andrew Davenport, Matthew and Adam Grigsby, Patrick and Ryan Cunningham; 4 great grandchildren, Luke and Mason Stegall, Hayden and Ella Busch. He is preceded in death by his brothers Rhean and Byron and parents Glenn and Mayme Cunningham of Casper Wyoming. Visitation will be from12:30 pm to 2:00pm Saturday at First United Methodist Church. Services will be conducted at 2:00pm Saturday at First United Methodist Church Guntersville, AL. A private burial for family members will be in Crestview Cemetery, Guntersville, AL. Carr Funeral Home in Guntersville, Alabama is in charge of service. In lieu of flowers the family requests donations be made to the Alzheimer’s Association (alz.org) or the Smile Train (SmileTrain.org)

Richard &#8220;Dick&#8221; Glenn Cunningham, 87, of Birmingham, formerly of Guntersville, passed away Wednesday, June 11, 2014. He was a beloved husband of 62 years and cherished by his family and friends. He loved people and had a way of making... View Obituary & Service Information

The family of Mr. Richard Glenn Cunningham created this Life Tributes page to make it easy to share your memories.

Send flowers to the Cunningham family.