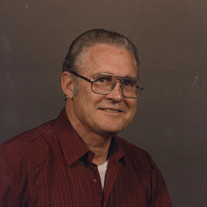 Ralph Tidmore                   He was a Marine and a million-dollar real estate producer in California before moving back to his native Alabama to go into real estate here. Ralph Tidmore of Guntersville died Thursday, Dec. 22., 2016, at Hospice-Shepherd&#8217;s... View Obituary & Service Information

The family of Ralph Tidmore Jr. created this Life Tributes page to make it easy to share your memories.

Send flowers to the Tidmore family.