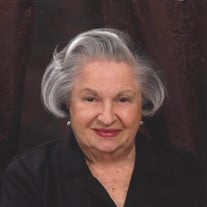 Mary Cobb Bennett Baker died April 7, 2020, at Marshall Manor Nursing Home, Guntersville, Alabama, at age 94. Mary was born June 13, 1925, in Crossville, Alabama. After high school graduation in 1942, she taught school for two years with an emergency teaching certificate issued during World War II. She received her B.A. and B.S. degrees from Jacksonville State Teachers College (now Jacksonville State University). Two days later, on August 16, 1947, she married Claude E. Bennett. He earned his medical degree from the University of Alabama in 1952. They moved to Camden, Alabama, where he practiced medicine with Dr. John Paul Jones. After a year, Dr. Bennett went back into the military for pediatric training. Mary was an Army doctor’s wife at bases in San Francisco, CA, San Antonio, TX, and Vicenza, Italy, then as civilians in Toccoa, GA, Nashville, TN, and Guntersville, AL before Claude’s death of malignant brain tumors in 1971 at age 52. Mary returned to the classroom, and for the next 33 years taught at Cherokee Elementary, Guntersville Elementary, and Carlisle Park Middle schools. A true educator and lifelong learner, she taught special education, then pioneered gifted programs, and earned Master’s degrees in both fields. Through an article in the Huntsville Times, she reconnected with Clyde D. Baker, her boyfriend from fourth to the eleventh grade. They married in 1972. Clyde was a mathematician at NASA, Marshall Space Flight Center, Huntsville, AL. After his retirement as chief of the Astrodynamics and Guidance Theory Division, he graduated law school and practiced for over a decade. Mary was once again widowed in 2006 after 34 years of marriage. Mary and Claude were charter members of Creek Path Baptist Church in Guntersville. After her children’s graduations from high school, she returned to her Methodist roots and was a member of Guntersville United Methodist Church for 44 years. She sang in the choir and played piano for the Scruggs Sunday School Class until she moved into retirement living. As an extensive world traveler, Mary kissed the Blarney Stone in Ireland, rode through the salt mines in Bavaria, floated the canals of Venice, and walked the Great Wall of China. She led spring break student trips to Europe for many years. As a lover of history and genealogy, Mary was an active member of the Daughters of the American Revolution for 40 years, serving as Regent and in many other leadership capacities. She was also an active member of the United Daughters of the Confederacy and a three-time state essay champion in Civil War history. Mary was an optimistic, hard-working, and generous wife, mother, grandmother, teacher, influencer, and friend. Family members describe her as “a force of nature—in a good way” and “a force all her own.” To write about all her achievements, awards, and accomplishments would take hundreds of thousands of words and reams of paper. She was a remarkable woman. Mary is preceded in death by her parents, Vernal and Tisha Cobb; her siblings, Jackie Cobb Collier, Bonnie Cobb Skinner, and Kenny D. Cobb; and her husbands, Dr. Claude E. Bennett and Clyde D. Baker, Esq. She is survived by her children, Elizabeth (Ted) Traylor and Elliott (Shelley) Bennett, her grandchildren Rachel (Brad) Hinote, Bennett Traylor, and Matthew (Danielle) Bennett, and her great grandchildren Kathryn Hinote and Elizabeth Hinote. A celebration of Mary Cobb Bennett Baker’s life will be held at a later date.

The family of Mary Cobb Bennett Baker created this Life Tributes page to make it easy to share your memories.

Send flowers to the Baker family.