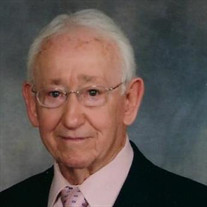 Two words lovingly describe the life of Knowlton Leon Smith: kind and gentle. He always had a smile for everyone and that is how he will be remembered. Mr. Leon Smith peacefully passed from this earth on Tuesday morning, July 30th, 2019, at Marshall Medical Center North, after several weeks of illness. He was born on April 10, 1926, and was 93 years old. Funeral services were held at the Guntersville Church of Christ on Friday, August 2, 2019. Visitation preceded the service. Bro. Phillip Bradley and Bro. James Dudley officiated. Burial was at Crestview Cemetery in Guntersville, Alabama. Pall bearers were: Matt Carter, Jeff Word, Clark Word, Gary Troup, Tony Denton, Mark Beaver, and Jeff Beaver. Per the family’s request, acapella singing was provided by the Guntersville Church of Christ Chorale. Mr. Smith lived in Albertville, Alabama, but had previously been a long-time resident of Guntersville, Alabama. He was born in Grant, Alabama and graduated from Kate Duncan Smith DAR High School. When he was in first grade, he was chosen to represent the school at an event at the White House where he would play with the children of President Roosevelt. His parents were so proud of this honor that they bought him a new suit and tie to wear for the occasion. However, he was asked to change into “overalls” for the official photograph. That was a special memory of his. He married Bobbye Campbell of Grant, Alabama, on Valentine’s Day in 1948. They were married for 69 years and were a wonderful example of true love and devotion. He worked as a truck driver for Ryder Truck Lines and Commercial Carriers and retired in the late 1980s. He always told everyone that he “loved driving trucks”. He was a member of the Guntersville Church of Christ and spent many hours volunteering at the church Benevolent House. He also lovingly assisted his wife for many years in caring for his mother-in-law (Agnes Campbell) and his sister-in-law (Billye Ann Campbell Word) before their passing. He is survived by one daughter, Mary Dale Smith Beaver (Rudy) of Albertville, one grandson, Matt Carter, of Guntersville; two sisters, Florence Dennis and Kate Spurgeon both of Grant, Alabama, and many nieces, nephews and their families. Mr. Smith was preceded in death by his wife, his grandson, Christopher Carter, two sisters, Cumi Newby and Idessa Troup, and a brother, Henry Smith, and his parents, Alonzo and Molly Smith of Grant, Alabama. In lieu of flowers, the family suggests donations may be made to the Guntersville Church of Christ Childrens’ Programs.

Two words lovingly describe the life of Knowlton Leon Smith: kind and gentle. He always had a smile for everyone and that is how he will be remembered. Mr. Leon Smith peacefully passed from this earth on Tuesday morning, July 30th, 2019, at... View Obituary & Service Information

The family of Knowlton Leon Smith created this Life Tributes page to make it easy to share your memories.

Send flowers to the Smith family.