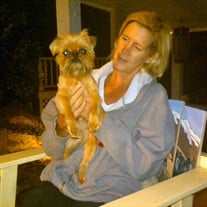 Joni Roberts, 58 Joan M. Hensel (Joni) Roberts died Tuesday, April 12, in the Huntsville Hospital. She was 58. Her death came at the end of a 10-month battle with lung cancer after being diagnosed the day before her birthday last June. Mrs. Roberts was a devoted employee of the Marshall County Health Department. Determined to get in her full 25 years working there, she could be found working at her desk as late as last Wednesday (April 6) even though she had been on oxygen continuously since March 28. After a treatment at CCI last Thursday (April 7), her oxygen level dipped to an extremely dangerous level and she was rushed to Huntsville Hospital with acute hypoxia. Her health continued to degenerate until her passing on Tuesday. She was born in Ann Arbor, Michigan. As a member of a military family, Mrs. Roberts lived in Argentina as a toddler and graduated from high school in Frankfort, Germany. The family established roots in Kendall, Florida, as her father transitioned into a career with the FAA. Mrs. Roberts was working in the avionics field when she relocated to the Atlanta area. It was there she met her husband, Guntersville native Tom Roberts, who was the public relations director at Atlanta International Raceway at the time. Tom moved on to be the assistant general manager of the Nashville International Raceway and the couple were married in 1981 in Nolensville, Tennessee. While living in Nashville, Mrs. Roberts took an entry level position with the Metro Nashville Police Department (MNPD) and rose to the rank of Senior Latent Print Examiner. The couple bought a weekend cabin at Pine Island Point and moved there to live in 1989 as Tom was now traveling on the top level NASCAR circuit working with drivers, teams and sponsors. After serving as hospitality director for driver Alan Kulwicki’s team for a few seasons, Mrs. Roberts was tired of the road and eventually landed her position at the health department. In 1992, the couple sold their place on Pine Island Point and moved to their home on Wyeth Drive, where she resided at the time of her death. For several years as a hobby, Mrs. Roberts honed her skills in the stained glass and glass etching craft, winning several awards. Her work can still be found around Guntersville today, such as on doors inside St. William Catholic Church. With Tom’s job keeping him on the road so much, the couple decided against ever having children early in their marriage. Mrs. Roberts’ “kids” came in the form of pets of all shapes and sizes. At one time, her “zoo crew” consisted of five parrots, four dogs and a cat. Although she never had any children of her own, Mrs. Roberts was known for her mothering instinct and was considered as Godmother to several children who grew up in the area. Always an outgoing person, she took up stand up paddle boarding just as it was becoming popular. She could be seen on a regular basis out on the lake with her beloved Brussels Griffon (MaiTai) riding on the front of her board even after being diagnosed with cancer. The couple kept a boat at the Val Monte Marina and cherished the friendships they made with the marina crowd. Through her husband, a University of Alabama graduate, Mrs. Roberts became a staunch supporter of Crimson Tide athletics and attended three of the last four national championship games. Survivors include her husband of 34 years, Tom, brother Barnie Hensel (Melba), sisters Susan Hensel-Henry (Silas), Cari Maiorino (Anthony) Patricia Leisner (Anthony), several nieces and nephews, and constant canine companion MaiTai. She was preceded in death by her parents, Frank A. and Mary Jean Hensel. A memorial service for Mrs. Roberts was held on Friday in the chapel at Carr Funeral Home. Father Dale Grubba, who presided in the funeral services of Kulwicki, Davey Allison and others in the racing community, officiated. There was no interment as her body was cremated with her ashes to be spread along her paddle board route on the Big Spring Creek area of Lake Guntersville. In lieu of flowers, the family requested that donations be made to the American Cancer Society or the Second Chance Shelter at 130 County Road 398, Boaz, AL 35957. The family wishes to publicly express their thanks to Dr. John Waples, Dr. Jason Smith and the staffs of Clearview Cancer Institute, Huntsville Lung Associates, Center for Cancer Care and Huntsville Hospital for helping Mrs. Roberts fight her battle. # # #

Joni Roberts, 58 Joan M. Hensel (Joni) Roberts died Tuesday, April 12, in the Huntsville Hospital. She was 58. Her death came at the end of a 10-month battle with lung cancer after being diagnosed the day before her birthday last June. Mrs.... View Obituary & Service Information

The family of Joni Roberts created this Life Tributes page to make it easy to share your memories.

Send flowers to the Roberts family.