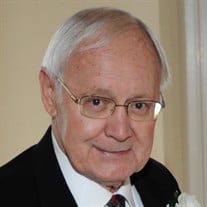 On Thursday, December 19, 2019, only one day shy of their 60th wedding anniversary, John Randal Strickland (also “J.R.” to some, “Raymond” to others) died at the age of 81 at Marshall Medical Center North from a cardiac-related event shortly after arriving in Guntersville, AL, with his beloved wife and childhood sweetheart, Sue Jones Strickland. He was determined not to allow his declining health to prevent them from attending regular informal reunions of their high school friends back in their hometown where they had celebrated their 50th anniversary 10 years earlier amongst a large gathering of family and friends. John was born in Marshall County, AL, on November 18, 1938, and was the youngest child of Barney Bedford and Ollie Belle Peters Strickland. His siblings included his brother, Alton Strickland, and his sisters, Eloise Brown (currently of Arab, AL), Ila V. Hard, Ester Strickland and Junita Strickland. One of the highlights of John’s youth was his time as co-captain of the Marshall County High School’s championship football team. He remained an avid football fan throughout his life, especially when he was following the University of Alabama’s Crimson Tide. After high school, John served in the US Army Reserves. He started his “suit & tie” career at Household Finance Corporation in 1960, and in 1985 moved to Fleet Finance, Inc., where he was President & CEO. During his career, he also served as the President of the Georgia Financial Services Association and as President of the National Consumer Finance Association. John retired from Fleet in 1993. Shortly thereafter, he and Sue moved back to Guntersville where they spent the majority of his retirement years. In addition to his stellar career, John was first and foremost a true and loyal family man. He and Sue have three children who all live nearby in the metropolitan Atlanta area: Mitchell Strickland (Lynn), Carmen Strickland and Misha Boswell. In 1994, John was proud to add one more title to his resume – that of “Papaw” – when he first became a grandfather to his four granddaughters: Emily Strickland, 2016 graduate of Georgia Tech; Annie Strickland, soon to be 2020 graduate of Georgia Tech; Aubrey Boswell, soon to be 2020 graduate of Georgia College; and Payton Boswell, soon to be 2020 Harrison High School graduate, with a nice list of college acceptances from which to choose. Several years ago, John and Sue moved to Acworth, GA, to be near their children and grandchildren. All four granddaughters learned early on what a generous and kind-hearted man he was behind his sometimes gruff-sounding voice and demeanor that never had them fooled for a minute. While it was rare that he shared the stories, throughout his lifetime there were a number of people whose paths crossed John’s, family and friends alike, whom he would quietly help out behind the scenes in numerous ways. Those stories speak volumes about the man he was, but they are no surprise to those who knew and loved him. John’s funeral will be held at 2pm on Friday, December 27 th , in Guntersville, AL, at Carr Funeral Home; visitation beforehand from 11am to 2pm; burial to follow in Marshall Memory Gardens. Pallbearers will be Adam Brown, Glenn Brown, Jason Brown, Terry Brown, Doyle Hard and Hoyle Hard. Honorary pallbearers will be Brody Brown, Jesse Brown, Trevor Daycock, Richard Hard, Spencer Lesley and Jacob Underwood. Any donations in memory of John can be sent to the American Kidney Fund at www.kidneyfund.org.

The family of John Randal "Raymond" Strickland created this Life Tributes page to make it easy to share your memories.

Send flowers to the Strickland family.