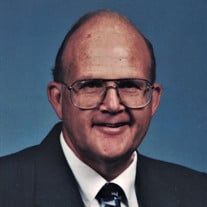 He was a Methodist minister by vocation and a computer scientist by profession. He ministered to small churches throughout Marshall County for almost 50 years and worked as a software engineer at Marshall Space Flight Center for 36 years until his retirement in 1993. Rev. John Will Clark of Guntersville died Saturday, March 23, 2019 at his home in Guntersville. He had been in good health until diagnosed with Alzheimer’s disease in 2015. He was 82 years old. His funeral will be Tuesday, March 26, at 2:00 at Carr Funeral Home following visitation from 12:00-2:00. Burial will be in Crestview Cemetery. Rev. Billy York and Rev. Howard Thompson will officiate. He lived in Guntersville his entire life and graduated in 1955 from Marshall County High School. He was married to Betty Smith Clark who taught biology and human physiology at Guntersville High School until her retirement in 1994. Throughout his career, he and his wife worked closely together as a ministry team until her death from cancer in 2011. As a software engineer, he was involved in flight system design for the Redstone, Apollo, Sky Lab and Space Shuttle programs. As a Methodist minister he served a number of area churches: Joppa (Arab), Bethel (Georgia Mountain), Southside (Guntersville), Fairview (Hustleville Road), Diamond (Warrenton Road), and Pleasant Grove (Hulaco). He is survived by a son, Steve Clark (Becky) of Guntersville; 4 grandchildren; John Clark (Emily), Sarah Hester (Justin), Rachel Hartsfield (Matt) and Michael Hickey; and 4 great-grandchildren. He was preceded in death by his wife and a daughter, Diane Clark Hickey. His pallbearers will be John Clark, Justin Hester, Matt Hartsfield, Jim Harrison, Phillip Edmonds, and Keith Harper. Honorary pallbearers will be Kerry Greenwell, Reggie Stewart, Oliver Smith, James Vaughn, Jack Robertson, and Sam Fredericks. In lieu of flowers, the family suggests memorial donations to Amedisys Hospice of Huntsville (2101 Clinton Avenue), the Pleasant Grove United Methodist Church in Hulaco (25 Pleasant Grove Rd., Joppa, AL 35087), or the Guntersville First United Methodist Church “Respite” program.

He was a Methodist minister by vocation and a computer scientist by profession. He ministered to small churches throughout Marshall County for almost 50 years and worked as a software engineer at Marshall Space Flight Center for 36 years until... View Obituary & Service Information

The family of Mr. John Will Clark created this Life Tributes page to make it easy to share your memories.

He was a Methodist minister by vocation and a computer scientist...

Send flowers to the Clark family.