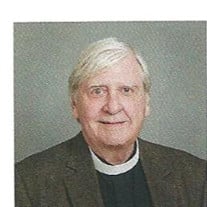 The Rev. Joe W. Sanderson, affectionately known as" Father Joe" died Monday Nov 9, 2015 at his home in Guntersville, AL. Educated at Columbia Military Acedemy, The University of the South, Sewanee, and Seabury Western Theological Seminary In Evanston Ill. He was Ordained to the Episcopal Priesthood in 1963. He served parishes in Minnesota,Arkansas, Tennessee, and Alabama. In Alabama, He was Rector of Trinity, Wetumpka, St. Lukes Jacksonville, before becoming Rector of Epiphany, Guntersville where he served for 16 years, he retired in 1999. He then served as Priest in charge at St. Barnabas, Hartselle. Under his leadership at the Church of the Epiphany, Guntersville a new Church was dedicated on Sunset drive on Epiphany Sunday 1991. He was especially involved in the healing ministry of those suffering from addiction and served as the Diocesan Recovery Commission for many years. He was also active in Cursillo, appointed by Bishop Stough to the Secretariat as Spiritual Director for several terms. When Hospice was formed in guntersville by Gayle Roadruck, He served as Chaplain. One of most outstanding qualities, according to his former Senior Warden, was "to share with the parish Family his own spiritual growth with such good humor and honesty that we are able to be honest with ourselves." He loved life was an avid fisherman and hunter, He tyed his own flies with great skill. He was precided in death by his mother Etta Agee Sanderson and His Father Lewis Wesley Sanderson He is survived by his wife Jan Sanderson, His son Marc Sanderson Daughter in law Amy Sanderson, Daughter Missy Sanderson, Grandchildren Julia Stevens of Atlanta, Finn Heatherly, Will Sanderson, Dylan Sanderson and Cati Grace Sanderson The family requests that memorials be sent to Epiphany Church Guntersville AL, and Hospice of Marshall County, Shepards cove. There will be a memorial service on Monday Nov, 16 at 11 am at the Church of the Epiphany followed by a reception at Sanderson Hall.

The family of Rev. Joe W. Sanderson created this Life Tributes page to make it easy to share your memories.

Send flowers to the Sanderson family.