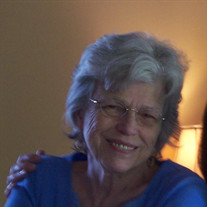 Janice Marie (Roebuck) Mathews, 76, passed away on October 20, 2017 at Marshall Manor Nursing Home in Guntersville, AL. Janice was born on December 30, 1940 in Tuscaloosa and raised in Eutaw, AL. She graduated from Greene County High School a year early to marry her sweetheart, Huey Larry Mathews, in 1958 and begin their lifelong love story and adventure together. They had the opportunity to travel the world during Larry’s work in the Air Force and U.S. Army Corps of Engineers and lived in Cape Cod, MA, Roswell, NM, Jackson, AL, Fairhope, AL, Mobile, AL , Tuscaloosa, AL, Clarksville, TN, Riyadh, Saudi Arabia, Hillsboro, TN, Hulaco, AL, and Guntersvile, AL In addition to being a devoted mother, Janice worked in many fields throughout her life. To name a few, she was a sales clerk for fabric stores and dress shops, and transcribed essays for students at The University of AL. While in Riyadh, from 1978-1987, she was the secretary for the director of Whitaker Hospital Development Program, and the administrative assistant for Whitaker’s Olympic Development Program. Janice and Larry moved to Arab, AL in 1993, where Janice lovingly cared for her mother and sister for almost two decades. She enjoyed gardening, playing card games with family, and bowling with her husband. She bowled in Marshall County leagues from 1993 until earlier this year. All who knew Janice were blessed by her unfailing positive attitude and strong Christian faith. She was a natural caregiver and joyous servant of the Lord. Even during the darker days of Alzheimer’s, Janice relied on prayer, coupled with a good sense of humor, to cope and comfort those around her. She was preceded in death by her parents, Clemonds James Roebuck and Fannie Mae (Drummond) Roebuck, and sister, Betty Mae Roebuck Melton. She is survived by her husband Larry; two sons, Barry Mathews and wife Beth, Russell Mathews and wife Janet; one daughter, Sherri Sheldon and husband John; five grandchildren, Meagan Mathews, Ashley Garrett and husband Robbie, Wesley Mathews and wife Rachel, Jack Mathews, and Angela Mathews; one great-grandson, Robert Neil Garrett III; one brother, Bill Roebuck and wife Jill; sister-in-law, Wanda Day and husband Curtis, brother-in-law, Bill Mathews and wife Susan, brother-in-law, Paul Mathews; several nieces and nephews, and many dear friends. The family would like to thank the entire staff of Marshall Manor Nursing Home for their compassionate care. The visitation will be held on Tuesday, October 24th at Carr Funeral Home in Guntersville, AL from 6:00 pm - 8:00 pm. A funeral service will be held on Wednesday, October 25th at Brindlee Mountain Church of the Nazarene, 370 Belair Drive, Arab, AL 35016 at 11:00 am with Pastor Randy Rathmann officiating.A grave side service will be on Wednesday, October 25th at Mesopotamia Cemetery in Eutaw, AL at 4:00 pm. The family will gather in the fellowship hall of Eutaw Baptist Church afterwards to meet with family and friends.Memorial donations in memory of Janice may be made to the Alzheimer’s Association.

The family of Mrs. Janice Mathews created this Life Tributes page to make it easy to share your memories.

Send flowers to the Mathews family.