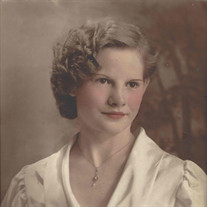 Gayle Davenport Roadruck, 98, Humanitarian, lived a long and productive life. On January 3, 1919, in Cooter, Missouri, Ruth Gayle Davenport was born to Claude and Samantha “Dixie’ Jordon Davenport. Gayle is survived by her son, David Roadruck and wife Pamela Abney, daughter-in-law Kathy Vass Roadruck, three grandchildren (Brian, Heather, Patrick) and three great grandchildren (Brittany, Jordon, Bianca). Gayle was preceded in death by her husband Kenneth Roy Roadruck and son Kenneth Lewis Roadruck. Gayle’s only sibling, a sister, died in infancy. Gayle passed away peacefully on Sept. 27, 2017. Gayle and Ken moved from Chicago to Guntersville in 1958, founding Roadruck Tool Engineering Company, where she was the Office Manager. Gayle was an excellent cook and, in her younger years, was known for her fabulous dinner parties. Almost immediately, Gayle became a member of Church of Epiphany in Guntersville, where she was an active member all her life. Around 1972, she founded Marshall County Helpline. In 1978, Gayle moved to Cookeville, TN, where she ran the deli in a grocery store. During that time, her husband Ken became ill. Tending to a chronically ill spouse sparked her interest in how to go about working with medical/other persons to ease pain and suffering in dying. Gayle credited this experience to her interest in hospice care. In 1982, Gayle moved back to Guntersville, single-handedly founding Hospice of Marshall County, bringing in other volunteers. Gayle served hospice in a volunteer capacity for many years, watching it grow into the multi-faceted organization it is today. In 1988 Gayle was named Humanitarian of the Year, commemorated with a plaque in her honor residing in the MC Courthouse. Gayle served the city and county as a volunteer on many committees and in various appointed civic roles throughout her life. No remembrance of Gayle would be complete without mentioning her love of nature, hiking, gardening, and building things. Gayle mentored countless people, particularly children, through her work with Epiphany and Hospice. The Church of the Epiphany Memorial Garden was one of Gayle’s passions. She lovingly laid the brick walkway, planted many of the trees and shrubs there today, hauled bricks for the intricate memorial wall, and had the gazebo made in memory of her late son Ken. A special person like Gayle, who gave so much of her time, hard work, and love to others, for so many years without expectation of compensation, is praiseworthy. In lieu of flowers, if commemoration is chosen, donations can be made to Hospice of Marshall County (Alabama) and/or Church of the Epiphany Guntersville (Alabama), Memorial Garden Fund.

The family of Gayle Davenport Roadruck created this Life Tributes page to make it easy to share your memories.

Send flowers to the Roadruck family.