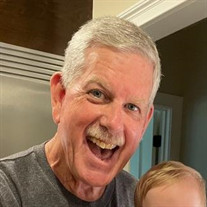 Mr. Douglas Robert Stewart passed away July 26, 2021 at Marshall Medical Center North. He is survived by wife, Joann Stewart; daughters, Jessica (Michael) Day and Christina (Tony) Bracci; sisters, Donna Norris, Audrey Grice, Donna Lewis, Debbie Werra; grandchildren, Kara Day and Caleb Bracci; several nieces and nephews; many people he considered family. Doug certainly made the most of his short 64 years on this earth. He faithfully served in the United States Air Force, retiring as a Master Sergeant after 20 years. He was proud to have served in Operation Desert Storm and to have become an initiated Navy Chief. After retiring, Doug supported the military in a contractor role as a Senior Test Engineer, a path that eventually led him to start his own company, Milestone Intelligence Group. He also proudly served in Operation Iraqi Freedom. Everyone wanted to work at Doug’s company; he was very proud. Doug’s optimism was unparalleled. There was never a bad day. Rain was “liquid sunshine” and if you asked him how he was doing, he would always say, “finer than frogs fur!” Doug always found the best in people and was always there with words of encouragement and praise but whatever you do, don’t pull his finger! He was always proud of the people in his life and pushed them all to excel. He was a die-hard Washington Redskins fan and loved to yell at the TV because the ref’s got it wrong. He was the best source of “corny dad jokes” and good advice, when we were willing to listen. He loved to play golf, keep an immaculate lawn and you better not get any dirt on his truck! Led by his faith, Doug’s mission was always to help others. He lived to help those who have been abused and addicts struggling with recovery, two things very close to him. He was always there with a second chance, or third, or however many someone needed. You could call any time and he would answer and his door was always open. Doug was an amazing role model and truly wanted the best for all those around him. He will be remembered as a faithful servant to the Lord, a devoted husband, caring father, true friend and an American patriot. He is preceded in death by his parents, Earl and Ruth Pendergast Stewart; step-mother, Ruth Stewart; sister, Sharon McDonald. In lieu of flowers, the family requests making a donation in his name to the Christian Women’s Job Corps, 5025 Spring Creek Dr, Guntersville, AL 35976.

The family of Douglas Robert Stewart created this Life Tributes page to make it easy to share your memories.

Send flowers to the Stewart family.