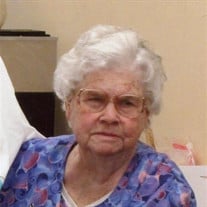 Mrs. Dixie Webb Couch, age 97, passed away on Wednesday, December 31, 2014 at Marshall Manor Nursing Home. She was born December 15, 1917 in the Ebell Community of Blount County, Alabama. She was the last of eight children of the late George W. Webb and Kate Cargo Webb. She grew up in the Red Hill and Warrenton Communities, and attended school at the old Red Hill School and Marshall County High School. She was a Methodist. She was the widow of Othel Vern Couch, WWII Navy Veteran (Seabees), who served a tour in the Pacific Theater. Mr. Couch died April 13, 1947 in Guntersville as a result of an automobile accident. They married in 1941 and moved to Decatur County, Tennessee where he was employed with a sawmill company. Mrs. Couch moved from Warrenton to Guntersville in 1951 and lived in the same house for 63 years. She worked as a manager of the old Doc’s Grill and at a number of other businesses in Guntersville. She was a homemaker and took care of both of her parents, other family members, and her granddaughter. She also enjoyed quilting, gardening, and traveling. She traveled to Texas at age 93 to visit with her family. She was preceded in death by five sisters: Pauline Webb, Ila Webb Edmonds, Mary Lee Webb Gregg, Nannie B. Webb Gross, and Dorothy D. Webb; and two brothers: Roscoe Webb and Glen Hinds Webb. Mrs. Couch is survived by: daughter, Bonnie Couch Segui and son-in-law, Everett Russell Segui, Jr. of Guntersville, AL; one granddaughter, Pamela Segui Slatsky and husband Michael D. Slatsky; three great-grandchildren: Katie M. Slatsky, Alex M. Slatsky and Ian M. Slatsky all of Birmingham, AL; one brother-in-law, Marcus Gross of Longview, TX; and a host of nieces and nephews. Services were held Sunday, January 4, 2015 at Carr Funeral Home with burial following in Gilliam Springs Cemetery. Deacon Haden Gregg officiated. Pallbearers were Phillip Edmonds, Randy Gregg, Chris Webb, Adam Gregg, Jacob Sweeney and Bronson Edmonds. Honorary pallbearers were nephews and great-nephews.

Mrs. Dixie Webb Couch, age 97, passed away on Wednesday, December 31, 2014 at Marshall Manor Nursing Home. She was born December 15, 1917 in the Ebell Community of Blount County, Alabama. She was the last of eight children of the late George... View Obituary & Service Information

The family of Dixie Webb Couch created this Life Tributes page to make it easy to share your memories.

Send flowers to the Couch family.