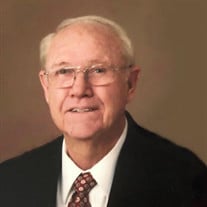 Billy Ray Cowen, known affectionately as Cowbird, age 83, passed away on September 20, 2020 at his home in Guntersville, Alabama. He was born in Guntersville in 1937 to Everett and Beulah Cowen. He was the oldest of two siblings. He was preceded in death by his wife, Dorthy Ann. Cowbird was a graduate of Marshall County High School (1955) and he attended Auburn Polytechnic Institute (Auburn University). He worked as a computer programer in Huntsville for GE and Arsenal for 28 years. While working in Huntsville, he also maintained his family farm on Highway 79. After his retirement he became a full time cattle farmer. His favorite pastime was working on his farm. There was nothing on the farm that he could not fix and he was always willing to lend a hand or tool to a friend in the valley. His favorite pastime was working on his farm. I f you could not find him on the farm you were likely to find him at the Huddle House with his Huddle family. He enjoyed breakfast with his buddies most mornings and his Monday night supper club members were very special to him. He married Dorothy Ann Wilkins in 1963 and they were happily married for 45 years. They had two children, Charles and Deborah. He and his wife enjoyed traveling, especially taking their camper everywhere from Banff, Canada to Key West, Florida and everywhere in between. They shared a lot of happy memories, except for Iron Bowl Saturdays. Cowbird was a die hard Auburn fan while his wife Ann was a proud Alabama alumni. Cowbird served as Sergeant First Class in the Army National Guard for 11 years. He was also a member of the Guntersville Jaycees for many years, where he also served as president. He had very fond memories of helping with the local boat races. Cowbird was a long time member of the First Baptist Church of Guntersville, and all the members of the Pairs and Spares Sunday School class were very special friends to him. His Sunday school teacher recently said, “Cowbird loved God, his friends, family and his church (and Auburn too!)” He prided himself on being the oldest living Cowen. He was a very proud Granddaddy and nothing gave him more joy than supporting his grandchildren in all of their activities. He was especially proud that he became a great grandfather last year to his “little buddy”, Waylon. He was preceded in death by his parents and his wife, Ann. He is survived by his son Charles (Denise) and daughter, Deborah (Matt), his grandchildren Charlsie Kirk (Justin), McKenzie Taylor and Evan Taylor, and his great grandchild, Waylon Kirk. He is also survived by his sister, Nan Cain (Bill) and nieces, Nikki Mitchell (Todd) and Wendy Walker (Allen) and a special friend, Louise Chandler. Cowbird’s service was held Wednesday, September 23rd at First Baptist Church in Guntersville. Burial was held at Clear Springs Baptist Cemetery. Pallbearers were Allen Walker, Jack Payne, Gary Gray, Steve Carver, Richard Lawson and Gary Davis. In lieu of flowers, please make donations to the First Baptist Youth Group, 1000 Gunter Avenue, Guntersville, AL 35976.

Billy Ray Cowen, known affectionately as Cowbird, age 83, passed away on September 20, 2020 at his home in Guntersville, Alabama. He was born in Guntersville in 1937 to Everett and Beulah Cowen. He was the oldest of two siblings. He was preceded... View Obituary & Service Information

The family of Billy Ray Cowen created this Life Tributes page to make it easy to share your memories.

Send flowers to the Cowen family.