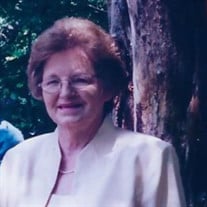 On Thursday, September 16, 2021, Betty Joyce Gabbard, loving wife, mother, grandmother, great-grandmother, sister and aunt passed away at the age of 81. Betty was born on January 17, 1940 in Ishkooda, AL to Woodrow and Eloise Green Griffin. She went to Jones Valley School. In the early 1960's, she moved to Detroit, Michigan and went to work at the GM (Fleetwood) plant. While there, she met and married her sweetheart, Jim. They lived in Detroit until around 1979 when they moved to Guntersville. Joyce then worked at the Lee Company until she retired. Betty had a passion for cooking. She also enjoyed gardening, yardwork, flea markets, driving through the State P ark, traveling to Gatlinburg, TN and spending time with family. Betty was preceded in death by her parents, Woodrow and Eloise Griffin; sister, Linda; step-sister, Tammie; son, Ricky; step-son, Mike and step-daughter, Debbie. She is survived by her husband of 50 years, Jim; daughter, Susan (Rose) Ziessler (Chuck); grand daughter, Christina Powell Mason (Rich); great-grandsons, Richie, Camron and Zach Mason; step grandchildren; sister, Mary Lou Allen; and her beloved Shih Tzu, GiGi.

The family of Betty Joyce Gabbard created this Life Tributes page to make it easy to share your memories.

Send flowers to the Gabbard family.