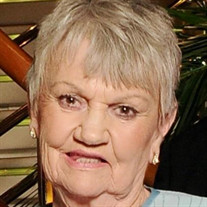 Mrs. Barbara L. Oney, 87, Ozark, MO, formerly of Guntersville, passed away Wednesday. She was born on September 27th, 1933 in Laurel, MS. Barbara married Russ in 1950, raised their family in Indiana and moved to Alabama in 1976. They were happily... View Obituary & Service Information

The family of Barbara Lee Oney created this Life Tributes page to make it easy to share your memories.

Send flowers to the Oney family.